The wikis are now using the new authentication system.
If you did not migrate your account yet, visit https://idp-portal-info.suse.com/

What "extra" does KIWI bring to LTSP?

An extra benefit of using openSUSE for LTSP in an existing NetWare school network is that the Novell client for Linux can be installed enabling use of existing network home directory structures, iPrint, Zenworks and more.

How does it work?

In case of PXE booting, the client looks for DHCP server, the DHCP server provides the network configuration and hands over further booting to TFTP server. The client then fetches "linux-ltsp" - kernel and "initrd-ltsp" - initial ram disk. Once the booting of the kernel and initrd completes, booting into the chroot image begins. Upon booting, the clients runs /etc/init.d/ltsp-client.init

ltsp-client.init is responsible for launching ldm (ltsp display manager) and fetching various variables from /etc/lts.conf, it also launches mounter script that mounts local devices into the user's session on the server. Various services required by the client such as sound using PulseAudio, local devices using cdpinger and ltspfsd, printing using jetpipe are also set up by the ltsp-client.init.

LDM supports login to the server via ssh. LDM logs in user and starts Xsession over ssh, it also supports authentication via ssh and Xsession without encryption(LDM_DIRECTX). 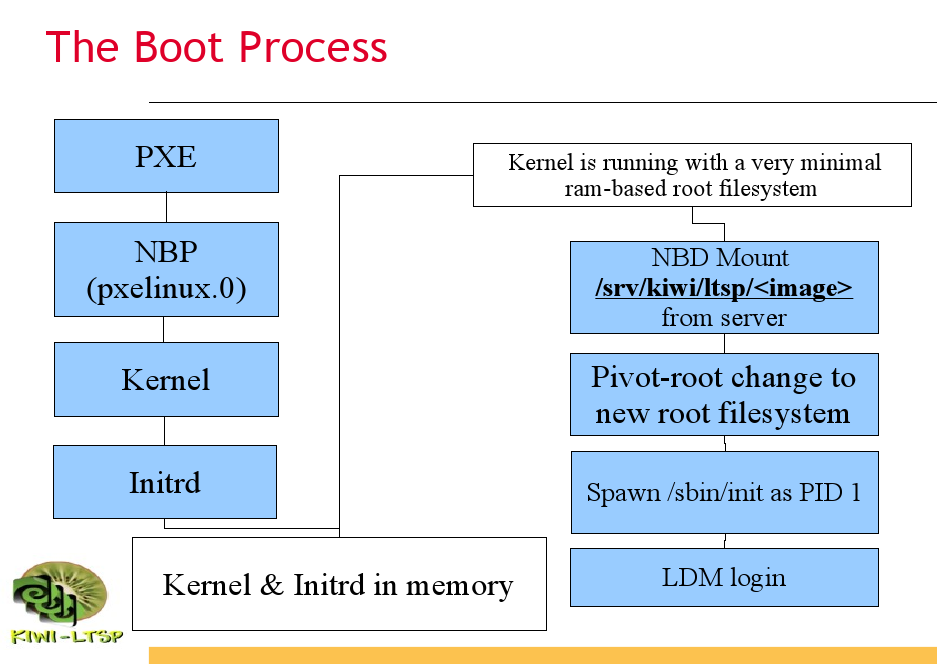